Macroeconomics is a funny thing. About 80 years ago, on the heels of our earlier depression, I wrote a book. It seemed as though people enjoyed The General Theory well enough, since the the ideas I described in it — along with some very silly ones that I disproved — became rather popular in the years that followed. Then, to my great disappointment — roughly around the time of a couple garish trends called "disco" and the "Rubik's Cube" — it seems my book became an embarrassment to certain Chicago raconteurs. Dispiritingly, as culture slid further toward "synthesized keyboards" and "supply-side economics", so too did my ideas retreat deeper into the abyss.

Class, this folderol ends today. The fates of money supplies, unemployed lads, and comatose economies mean too much to me to let this nonsense go unchecked. Books out and pencils sharpened, please.

For those students who are new this term, let me introduce myself. My name is Keynes — no no, say it like canes — yes, that's good — and I am a professor of economics here at Cambridge.

Before I came along, most people happily thought about money in ways that were — well, let's call them "classical," or pre-modern. But those ideas made as much sense to economies as classical ideas could explain the planets — they didn't! The entrenched policies in my day were, deep down, Newtonian: people assumed that money, even on a big scale, works just fine on its own, and that for any dollar that someone has in their wallet, they'll automatically buy things with it. More than anything else, I tried to make it clear that this was bananas — that it was entirely possible for an economy to hit the brakes because there wasn't enough demand. And it had nothing to do with morals, or molecular harmony, or "the free market." It was just the way macro really works — pure and simple.

At least, it was simple until now. Let's dive in!

(Please keep to the paved trails so as to protect the landscaping of the campus quad.)

Boy, this economy's in the pits! If only workers would accept wage cuts, we could grow our way out!

Aw, c'mon. Everyone's gotta tighten their belts, right? How about a modest wage cut. We're in a depression!

Awright, let's switch to policy. What's with all this stimulus talk, am I right?

But you gotta admit that all this government borrowing will shoot interest rates up.

Let's bring this down to basics. Fill in the blank: Unemployment is caused by _____.

Liquidate labor! Liquidate stocks! Liquidate the farmer! Liquidate real estate! It will purge the rottenness out of the system! People will work harder, lead a more moral life!

Andrew Mellon was President Hoover's Secretary of the Treasury.

He had oversight over the American economy during the immediate aftermath of the Stock Market Crash of 1929, and during the first years of the Great Depression. Like many of his "classical economics" generation, Mellon hated the thought of any proactive government help, and saw lousy employment as a moral problem. Do you think Mr. Mellon's ideas about how to fix a recession economy eventually went away? (Spoiler! No, Mr. Mellon's views about how to fix a recession economy did not go away.)

Take Mr. Mellon's silliness to its logical conclusion! Use the four blue buttons to pick his outfit and accompanying (terrible) quote.

“If the Treasury were to fill old bottles with banknotes, bury them at suitable depths in disused coalmines which are then filled up to the surface with town rubbish, and leave it to private enterprise on well-tried principles of laissez-faire to dig the notes up again (the right to do so being obtained, of course, by tendering for leases of the note-bearing territory), there need be no more unemployment and, with the help of the repercussions, the real income of the community, and its capital wealth also, would probably become a good deal greater than it actually is. It would, indeed, be more sensible to build houses and the like; but if there are political and practical difficulties in the way of this, the above would be better than nothing.”

Hey, that's a great idea! Help out the intrepid businessmen by finding all six bottles. 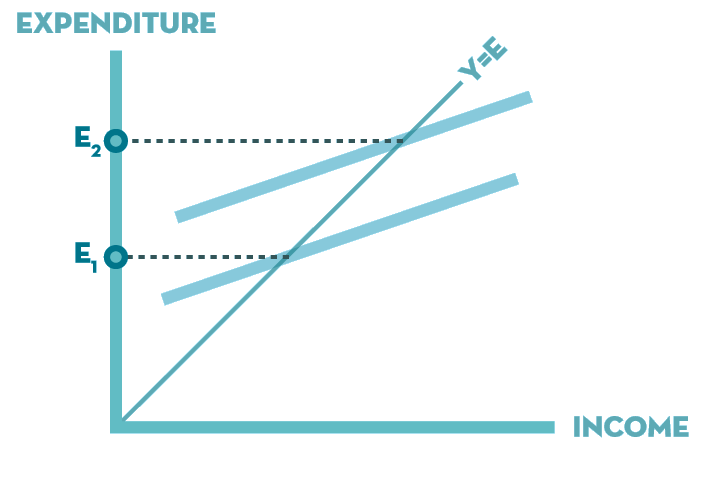 “…Spending by everybody is an increasing function of income — because [as] people are richer they'll spend more of their money (but not all of it) — and that always, of course, the economy ends up on that 45° line, where income equals expenditure. Okay, there's an accounting identity that says ‘income equals spending’ — but if you increase the amount that people are willing to spend at any given level of income — shift that thing up! — then you will actually move to a higher level of income. And that shows you, very simply, that the accounting identity does not mean that an increase in spending by the government must come at the expsense of private spending. Actually, on the contrary.” (Krugman: Keynes and the Moderns [17:42]) 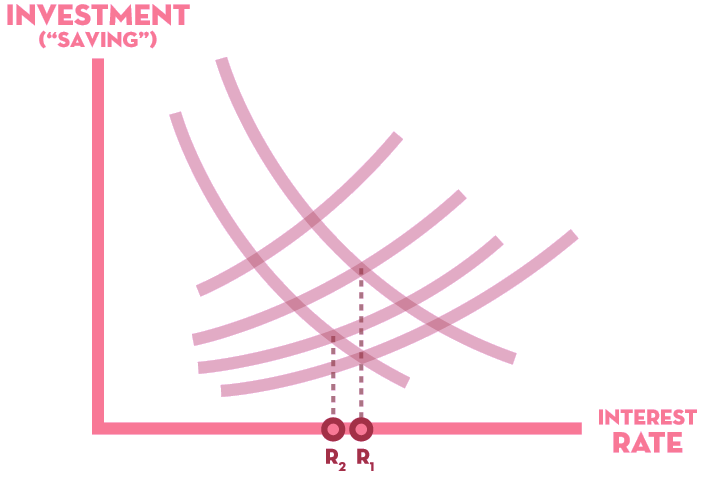 Putting the classical theory of interest to rest.

“…If the economy expands, income will be higher, some of that income will be saved, also possibly investment demand will shift. Here Keynes explained it with this diagram. […] This is just saying, suppose income rises. All things being equal, at any given interest rate, people will save more, because they have more income. Probably, also, firms will want to invest more, because there'll be more demand. Normally — though we don't know this for sure — the place where they cross will be lower, so the interest rate would be lower. What this is doing is actually telling you that there are — this is the point Keynes was making in that horrible diagram — there's no unique level of interest rate that matches savings and investment. It depends on something else: Namely, the level of income in the economy. The other way to say this is, actually — and this is the way we more often think about it — that the lower the interest rate, the higher will be the level of GDP. And that's on schedule. That doesn't tie it down. That's just a relationship. (Krugman: Keynes and the Moderns [21:34])

Before, during, and beyond Keynes's time, we've lived with some zany economic models. But while The General Theory did its best to prove that these simply don't appear in the real world, we can't seem to completely get rid of 'em. (Especially on the editorial pages.) Click each card to learn more about its fantastical, disproven, baseless, sounds-good-at-a-cocktail-party, pseudo-intellectual silliness! 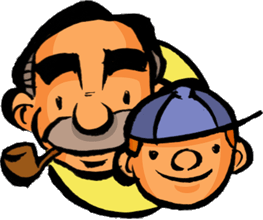 Have a grown-up help you with the spray-mounting of these printouts against a firm piece of reinforced bookboard (those fumes are toxic!), and then especially with the straightedge-aligned Xacto-knife cutting along the corner crop marks (those blades are sharp!).

Keynes for Kids has been designed for use with modern browsers.

Please upgrade your version of Internet Explorer, or pick from one of the following excellent and free browsers.

(Yes, they all work on Windows.)